Have people gotten this to work on the new Debian Wheezy image? When I plug it in I just get a blank screen.

Sorry if this is a n00b question but It has these “EEPROM” jumpers on the back to enter an address, do I need to set that in a certain way? The only other “cape” i’m using is this guy (http://elinux.org/CircuitCo:BeagleBone_Battery) which also says it has EEPROM support…i’ve done some googling but having a hard time finding good documentation on the EEPROM stuff…

Also, when you plug in the LCD cape should a graphical interface just appear, or do i need to run whatever the equivalent of “startX” or something from the command line to bring up the windowing system?

The tiny slip that comes with this LCD says you can reference the quick start guide on their products website here: http://www.4dsystems.com.au/product/4DCAPE_43/ but neither there nor anywhere can i actually find this supposed quick start guide. only thing i’ve found of any substance is http://www.mouser.com/ds/2/451/4DCAPE-43-Datasheet-REV1.1-262097.pdf

thanks for any help!

Humm... Do you get anything on the screen? Even something as simple as
a login prompt?

I don't personally have this cape, but was told it was compatible with
the lcd4 dts overlay. (i have the regular lcd4 and it works)

thanks for the followup Robert. I can see who my main source of wisdom is going to be here

the screen is actually just 100% blank, no cmd line prompt or anything. the screen does power on and turn a light grey, and the user and power led’s on the board light up, but I’m wondering whether maybe I’m not getting connection on all the pins, because the battery cape doesn’t allow the screen pins to slide down into it’s female equivalents very far…in fact if i flip the board over the screen is liable to just fall out of place…

i’m going to try outputting the BBB to the tv through the normal HDMI out and see if i can bring up a window system that way.

there’s just one particular part of the battery cape that is impeding the progress of the lcd cape from sliding all the way down onto it’s pins. that particular part is the jumper pins for setting the EEPROM. I’ve attached a photo. Do you think I could get away with bending these down or snipping them off or something? they come with little jumpers to connect them in different orientations. if i needed a certain orientation, i could just snip the pins and then dab a piece of solder between the ones that needed connecting, maybe? 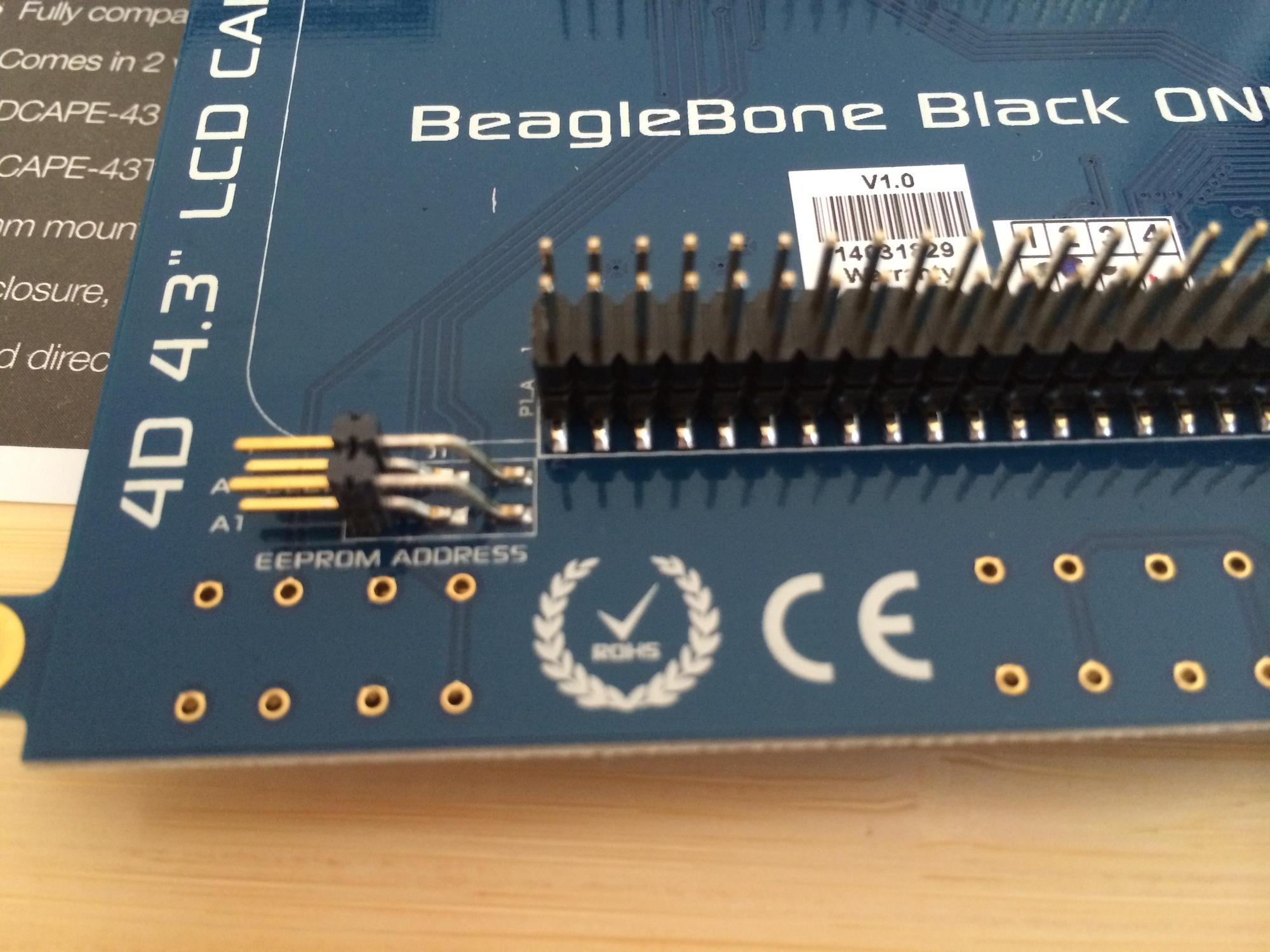 We really shouldn't need the eeprom either. We can actually override
the eeprom, do either of these work when you add them to
/boot/uboot/uEnv.txt

Do keep in mind that I know nothing of your hardware, and am not exactly a hardware guy. However, before you start making modifications to anything I would check to make sure you have power to the cape first. After that, I would remove your battery cape, and plug your LCD cape( I’m guessing ) directly into your BBB and see if it works that way.

After that I am not exactly sure how I’d proceed, but I may try to find adapter / extension headers before any thing else.

once it’s down on those pins, it doesn’t seem to want to relent.

if you’re curious about the hardware it’s nothing unusual: i linked to the battery cape and lcd cape above, and besides that it’s the latest revision of BBB with Debian Wheezy 7. i definitely had power to the cape, as I could still ssh into it on 192.168.7.2, and ping around, etc. i kept the 5V 2A power supply plugged in.

Robert, i’ll give that a shot and report back. thanks again!

that helped! by adding those lines to the /boot/uboot/uEnv.txt file the lcd screen fired up and displays boot up info in text mode very clearly across the whole screen, but then when it hits the graphical env it’s weird lines and squished to the right (photo attached, although it doesn’t really do it justice). perhaps this is just a config option for the proper resolution for the device? 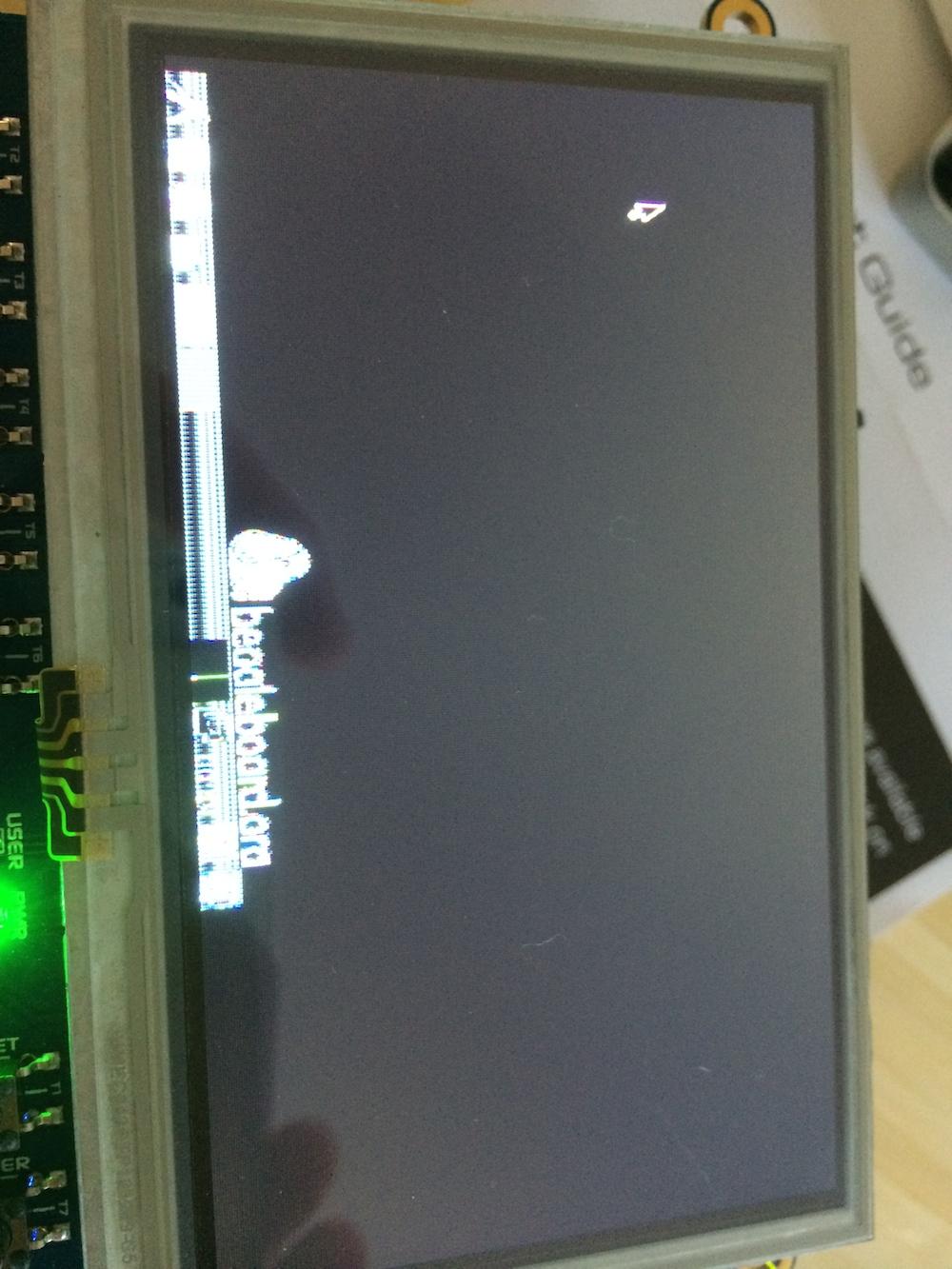 Something is definitely odd..

the battery cape will come off. William has a good suggestion to test one thing at a time and getting the 2 apart is good practice. just apply gentle but firm pressure on the ends and corners of the boards in question working your way around moving a little on each end at a time (8th or 16th of an inch at most). further if you think contact may be an issue, don’t hesitate to push the pins on the lcd board in a bit deeper. things should not be so loose as to fall out when jiggled, though you may have overdone it a bit plugging in the battery cape.

yes the jumpers need to all be set to an address not used by another board in the cape stack.

It seems to want to be 00A0 as 00A1 ends up with no screen at all. However i noticed some interesting debug info on the boot up screen in text before it goes to the screwed up GUI. i’ve attached photos. I notice it says there’s a conflict on slot #7 when loading the BB-BONE-LCD4-01 but no idea what it really means…

I pried the battery cape off and bent a few pins in the process, but it makes no difference on the result. putting the LCD cape directly on the BBB still yields the same vertical lines and squished screen. So it doesn’t seem to be a contact issue as i get the exact same results with or without the battery cape. And it doesn’t see to be a conflicting cape issue as the LCD cape is the only cape. 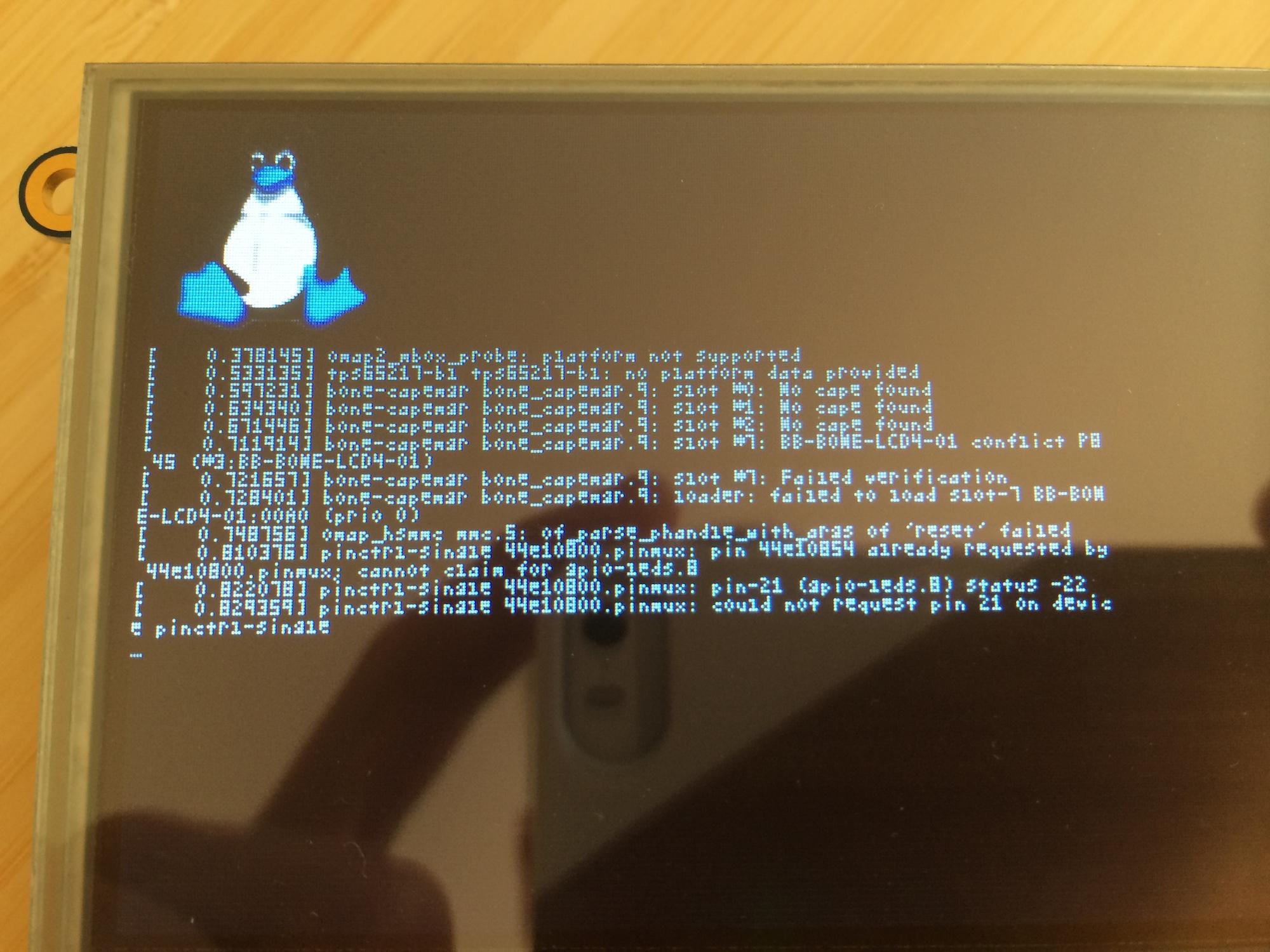 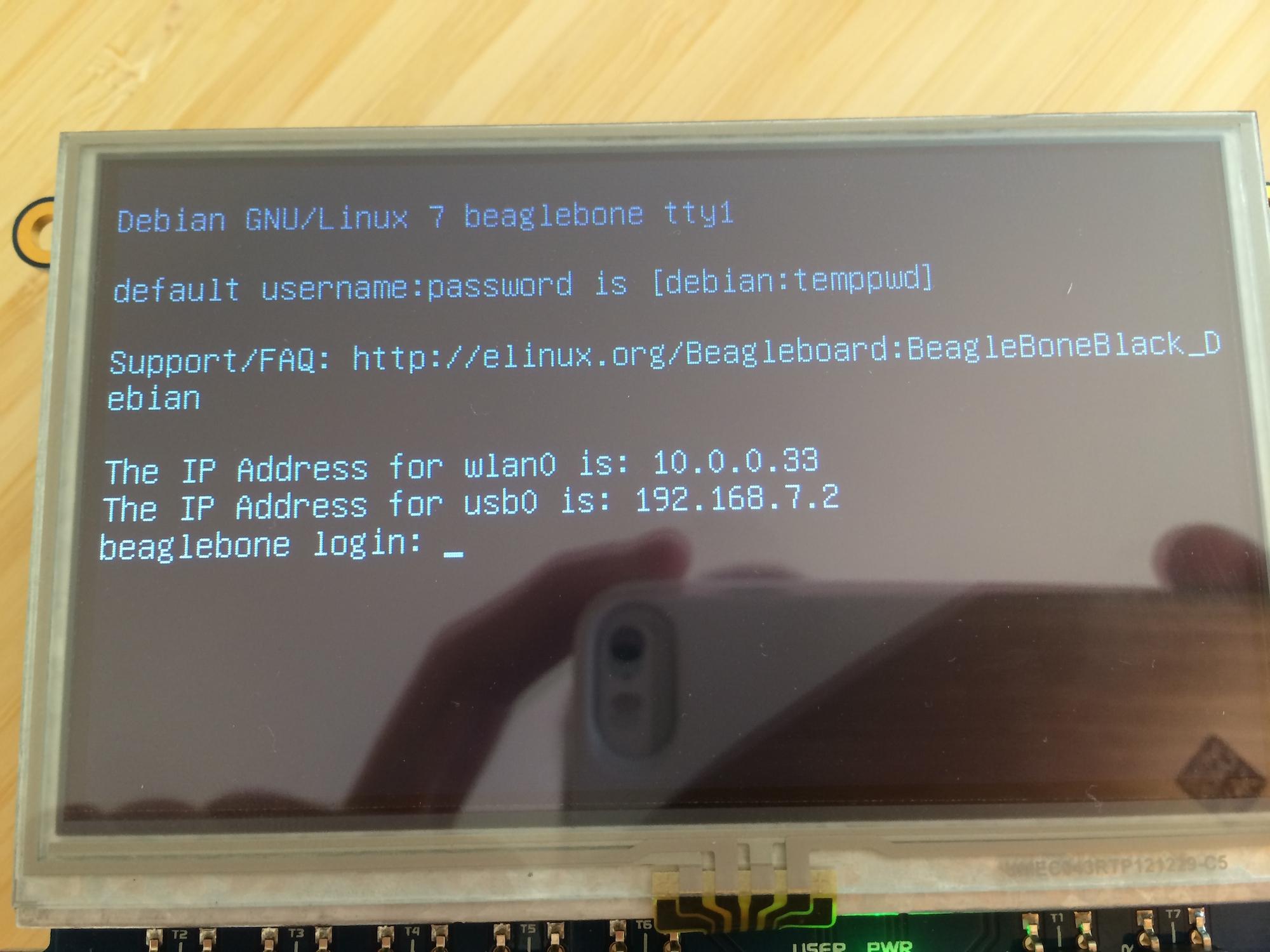 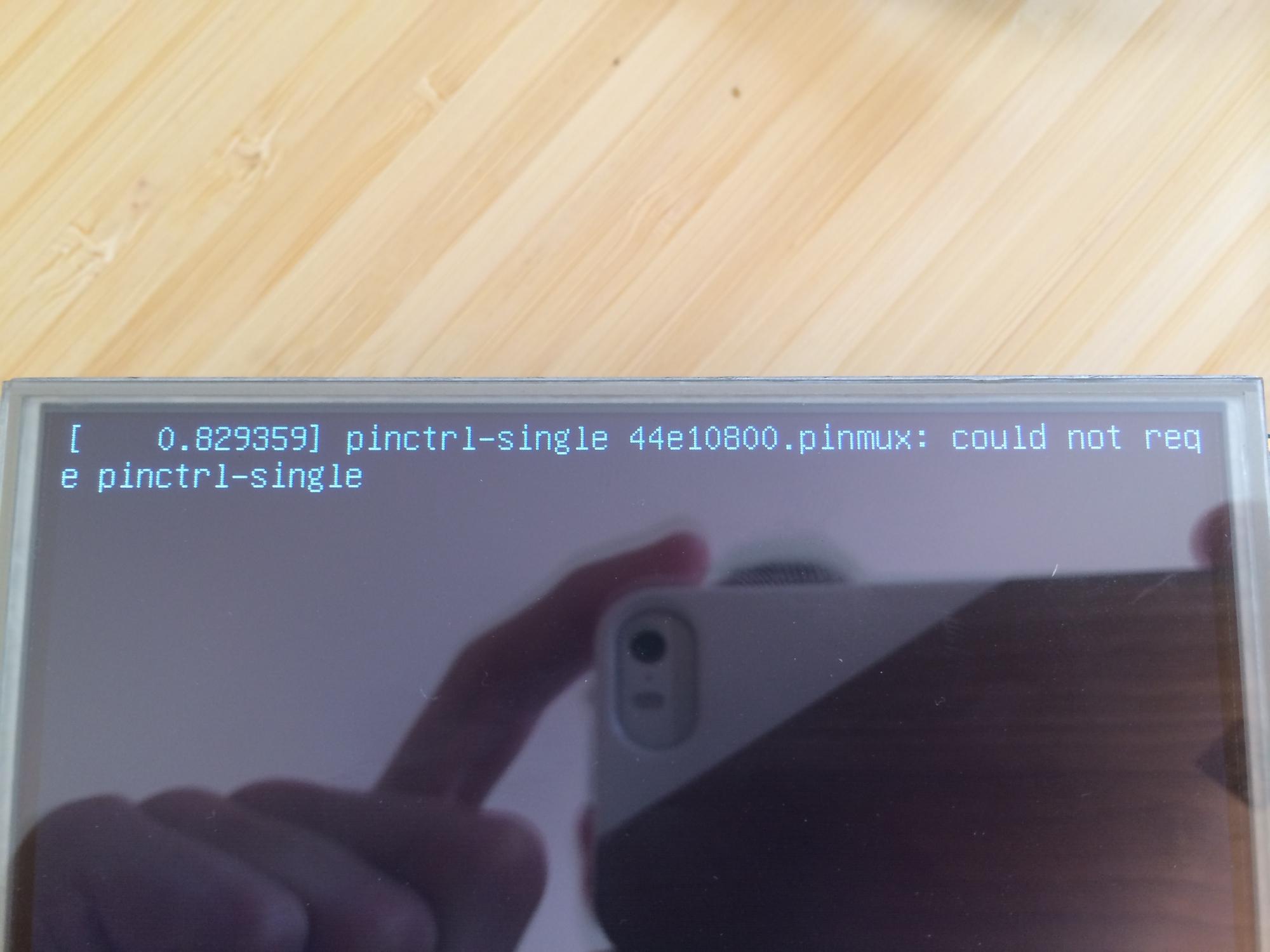 actually my project is already pretty shot by the fact that i can’t change the batteries without peeling the LCD cape off. i need a solution that doesn’t require me to carefully peel off the lcd shield every 2 days when the batteries need charging.

do you have any hardware suggestions on other ways to portably charge the BBB while having an LCD screen on top?

I’ve seen some chatter in here of a UPS cape, but could be the same thing you’re using now ? Other than that, I personally can not think of anything. Unless this does not have to be all in one physical package. In which case you could have an external battery of some sort with a charging circuit.

Yeah I found that ups cape it’s sexy but seems to be out of stock at every listed provider.

I also found a good more DIY solution using the PMIC pins on the board and a little lipo pack that fits between the standups on the board so you can still pile capes on top. Thanks for all your help! I’ll probably try the PMIC approach but first going to try something similar with an arduino

for anyone who may be curious, this is the DIY solution that is the best i’ve found http://www.element14.com/community/community/designcenter/single-board-computers/next-gen_beaglebone/blog/2013/08/10/bbb--rechargeable-on-board-battery-system