Altium file set for the Beaglebone?

Gerald sent me the ascii files for the allegro project, so you can
import the project.
The import is not perfect but you can see the board.
It would be fine that this file was in the zip file, so Gerald doesn't
have to send it everytime someone asks for it.

Ahh....I searched for Altium and missed your post from December 1st.
Glad that other folks are doing this too! What issues did you have
with the imported project?

Gerald sent me the ascii files for the allegro project, so you can
import the project.
The import is not perfect but you can see the board.

It would be fine that this file was in the zip file, so Gerald doesn't
have to send it everytime someone asks for it.

> Is an Altium file set for the Beaglebone available? Or, is there an

> file set available for one of the other Beagle boards?
>
> Thanks,
>
> --
> You received this message because you are subscribed to the Google

Why are there no files for Eagle CAD?
Was under the impression that TI is now targeting the hobbyist with this board.

It is a bit of a cross between personal efforts and TI efforts. Gerald doesn’t use Eagle, but has started to play with it. Eagle is only free for small boards anyway. Wouldn’t doing it in something like Kicad be more critical to it being open? Anyway, agreed it would be best to be in more formats.

FWIW, the free version opens "big" boards just fine, so if you want to double check something it works well enough.

I am not sure but believe that some BB-users are creating CAPES in Eagle format, however the mainboard is of different complexity (high speed – signal integrity – power integrity).

However the BB - AM3357 main board has been routed with Allegro as it requires a good high end tool to handle net length, controlled impedances, differential pairs, DDR II, …

If one has access to both OrCAD-Allegro and Altium, one can easily convert the Allegro database into Altium design format it requires little clean up.

As far as I know – Eagle has no ability to import CAD files from Allegro, nor has it utilities or ULP’s to check net length, controlled impedance, differential pairs, etc. …

– and then puts all the work in the community … also it would require a 6 (8) Layer stack build, and that is even not available in the lite version of Eagle.

Not to offend people, but tools like Board station, Allegro, Altium, Pads are intended for a different world – did not say you can not recreate such board with Eagle but it will take tremendous effort.

I hope this answers your question,

Were you able to import the orcad schematic? I am getting the
following error when I try to import the schematic: "Design file
'BEAGLEBONE-REV A3A.DSN' not recognized"

For the Allegro *.brd files the import process is straightforward …

I believe that *.DSN format has changed slightly OrCad 16.3 and upwards and Altium does not recognize yet this *.dsn format.

For the OrCad *.dsn files one needs to downgrade version towards 16.2 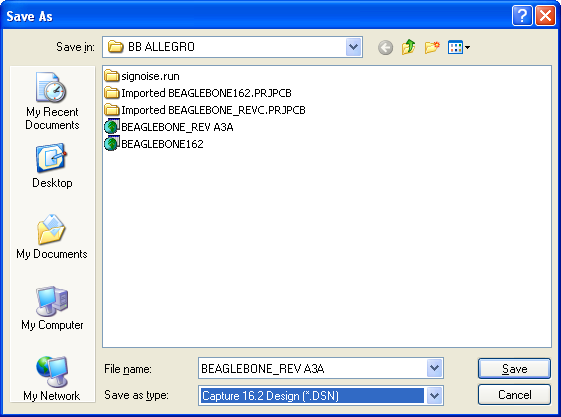 This way, I am capable of importing both *.brd and *.dsn from BeagleBone source files into Altium AD10.

You need to export the Allegro files in ascii format and then Altium can import those files. Copper pours and other polygons have to be redone because the import creates hundreds of edges for each polygon. Also, some of the parts have to be fixed. Synchronize the schematic with PCB in Altium and then generate gerber files which you can compare to the gerber files from BeagleBone. The can be an iterative effort, fixing PCB items and then regenerating gerber files. Count on a few days effort to get this done. I normally add 3D rendering to all the parts and then generate a Solidworks 3D view of the complete PCB.