Hi,
I have an issue when booting from battery on the VIN_BAT. The WIFI_EN light never turns on in this case but it does on USB power. It seems like the TL1963A Regulator doesn’t get any input voltage when on battery. We noticed the D2 diode is missing from our boards and it would give power to the regulator if it was there, but I am wondering if this was left off for a reason, or if there is a better way to fix it? Would it cause problems replacing the diode?Thanks!
Peter 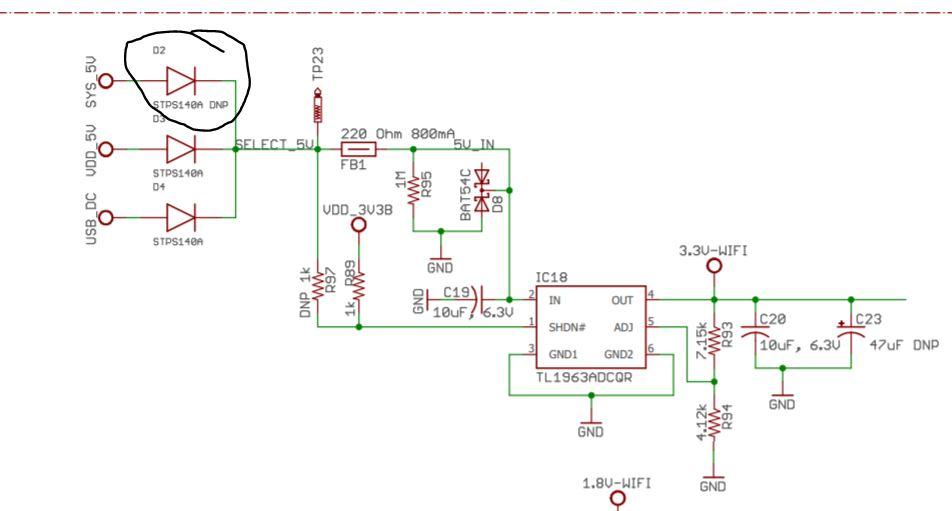 I have no idea what voltage is required by the wifi module is. But if it requires more than 3.7v, it won’t get it when you’re running off the onboard PMIC battery circuit. So if you need a constant 5v uninterrupted, you would be better off setting up your own external “UPS” type of system.

I have no idea why, but I can at least tell you that it was intentionally left off. The DNP part that is behind the value means “Do Not Populate.” I’d assume it was left off because it requires a high voltage.

I would move either D3 or D4 and place it in the spot where D2 should be. That would allow the WiFi to work whether you’re on USB, AC, or LiPo. There are some limitations here though. If a large enough power surge occurs on the WiFi chip then the PMIC might think there’s a short circuit due to the large power draw and it will restart the board. The other limitation is that you can never discharge your battery below 3.6V to 3.7V. To output 3.3V from the TL1963A power regulator it requires at least 3.6V to 3.7V at the input. I think this second point is the main reason D2 was removed because setting a 3.7V minimum for your battery is very limiting. If your battery is large enough to last a while before reaching that point I would install D2 and be happy.

I forgot to mention… the STPS140A diode used on this board will drop another 200-500mV across it. So that means your battery’s voltage should be at least 3.7V for the LDO + 500mV lost in the diode. This voltage is higher than what your battery will provide except at full charge. So that must be why they removed the ability to run wifi off the battery. Based on this info you can try this instead: remove D3 and D4, then install a wire or 0 ohm resistor in place of D2. That will connect the PMIC VSYS output to the Wilink part so you can always run the wifi on battery, AC, or USB.