I just pushed out another round of images for testing.

The "console" flasher was brought back, still only "200Mb" used.

kernel git tree is now at:

Let me know your thoughts.

Hey, I finally downloaded one of your prebuilt images for the first time last night, and was doing a bit of poking around. I never ran it though, just used mount -o offset* . . .

But I was curious about how nfs-uEnv.txt seems to have non standard uboot variables in it Am I wrong, or did you make some additional changes ? “client_ip” seems added( I’m used to ipaddr ), etc. It really cool you’re making NFS easily accessible for others thiough

Mostly I’m concerned that what I know has changed and possibly no longer works, etc etc. If uboot has been patched. I suspect this wouldnt be the case, but sometimes, you never know.

It's kinda of two fold. They are non-standard in the sense, u-boot has
used these other variables for years. I just used the kernel docs (1)
and did sed s/-/_/g on them. While at the same time I didn't want to
break existing nfs users by over writing their expected defaults nfs
u-boot variables.

btw, one of the other big reasons for the ipaddr -> client_ip change..
I need a hook in u-boot to hint, hey we want to try booting via nfs:

Very cool Robert, I suspected as much which is why I asked( ipaddr → client_ip ), I’ll have to give that a thorough look see at a latter time, but just gave it a glance. I think I get the gist.

One thing I have been wondering about for a while, is if it is possible to TFTP/NFS boot over g_ether. I remember reading some uEnv.txt files from apparently older beagle hardware and I think it is possible, but have not attempted passed trying once or twice.

It seems we could “usb start”, and then I’d have to read some of that older stuff to remember the rest of it, but . . . yeah unless it’s been patched out. Which wouldn’t make sense to me, but I suppose it is possible. So I guess what I am asking here is if it is possible. IF so, I have no problem experimenting on my own to get it working.

I downloaded the microSD/standalone lxde image. The system boots fine. However only the left half of the LCD screen (LCD4) is working. The screen being used is around 2.75" x 2.5" (W x L). The screen is compressed horizontally. I suspect the LCD is off-sync in the X direction.

I wonder if you could point me to the right direction on how to solve it. 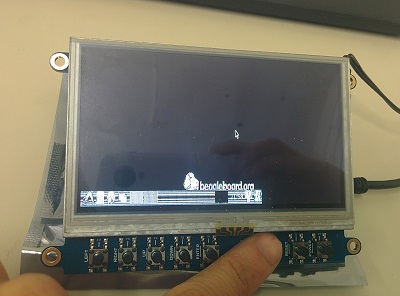 Yes, it looks exactly like on my LCD.
Lei

I’m on the road this morning, but I’ll revert the change later today and push out bone 63