I’m building a drone with my BBBW as its brain. I have my remote control for it mostly coded in VB.NET. Basically what it does is it runs the BBBW on the drone in hotspot mode and it just synchs the stacks in my tablet with the BBBW and I send UDP packets via winsock with raw “joystick” coordinates to the controlling daemon on the drone.

Range is only about 400 feet out doors, but more than enough to fly a drone around a little.

Here is a screen shot of what appears on the tablet. 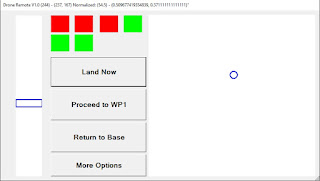 The left hand control is throttle and you can pitch by moving your thumb up and down on the right hand control and yaw is with right to left. Roll is nulled out by the 6DOF interial module. To fly forward what you do is pitch forward and increase your throttle and then you steer by yawing.

Here is a block diagram of the hardware on the drone. The remote is all software running on my POS Win10 tablet like I was saying.

I’ll try to dig up my blueprints for it, but basically how its put together is with 1/2" wooden dowel (which I’m going to sub out with carbon fiber rod when I’m done) and 3D printed “joints”. Here are some of the joints I designed on TinkerCAD (I would recommend this as a good part maker requiring little experience with it). 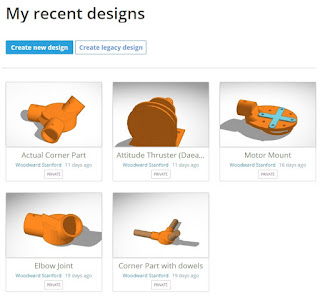 The STL files below aren’t finished so I won’t tell you the units of them so you can’t accidentally print them, but you can look at them in a STL viewer. They also probably have some problems with passing the manifold requirement.

The motor mounts are designed to attach a set of 2 Angel Drone Motors to each motor pod (4 total - quad (x2) copter). Needed a little more power so I just have two motors instead of one counter rotating.

Here is my autonomous flight planner (so its a little more than a drone). 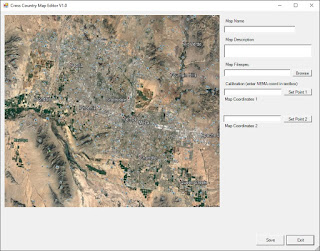 This is my “map editor” where I read in a Google Earth map and what I do is I calibrate it for 2D cartesian in meters around an origin (in this case Central and Van Buren downtown) and then I calibrate it by clicking two points on the map I know the NEMA coordinates for (which Earth just gives you by pointing and clicking).’

Then I go to my actual flight planner window and I click on the points in my flight path, and set the altitudes for each waypoint and feed it to the BBBW via FTP (its a pretty big file). I just hit the Waypoint button on my drone remote and it just runs the program, so its a good way to fly out of wifi range. I then get someone with an identical tablet to “catch” it when it comes in range, and it would be manually landed, or just the autoland feature that just nulls everything out and causes it to descend slowly enough that it doesn’t hurt the drone when it touches down.

It was interesting doing this because you need to set a 3D radius from each waypoint point because it never actually hits the point (more of a sphere of a preset diameter) that once is passes through this imaginary sphere then it knows to go to the next sphere or point.

It also has my environmentally sealed Emerson camera (that I still need to get an SD card for) that is just bolted to the underside of the base board that I just manually hit the video record before taking off. When I get some video I’ll post it here.

OK (laughing my ass off). Do you guys want to try out the drone remote? Its not done yet, but I have a windows installer for it.

You can run it on Windows 8/9/10 but if you have a Windows tablet, install it (it just uses’ VB.NET’s stock installer so it should come right off on an uninstall).

Right now all it does is let you push the buttons but it also reads the controls and it normalizes them (little numbers in the title bar). Kind of mess with it a bit to see if its good stuff. Also, you can’t use both thumbs at the same time you have to kind of alternate on throttle and stick. Its a fun little beasty.

I’ve managed to successfully test my BBBW to Win10 tablet wifi connection and its pretty solid with quick acquire. I’m actually thinking this thing will work. I just use socket to shoot over the stacks. Works great lmao.

OK someone download it and try installing it. Let me know if there are any problems and I’ll get to correcting them. lmfao serious put it on your tablet. Its cool as heck.