To power up the BBB from OFF when powered from the 5 v jack, I have to press the power button.
To power up using the mini-usb connector, all I have to do is turn on the USB power.

My question is this. Is there a way to have the BBB automatically power up when power is applied to the +5 jack?

It is supposed to power up automatically when you plug in the DC cable.

now I am confused because I thought it was normal procedure to hold the power button after inserting the 5V jack. (as noted by Richard-tx)

This thread lead me to believe the power button was the right way to do it ! https://groups.google.com/forum/#!topic/beagleboard/FGeL6jzOcB0

however the SRM indicates otherwise …

It is not the end of the world for me, but just interested all the same.

Do not touch the power button unless you plan to turn it off. The SRM is correct.

To power on all you have to do is plug in the power, either USB or DC.

Hi and thanks for your reply

Well this is not true for me (my BBB won’t boot directly with DC (Rev A5C))… but it is not a deal breaker for me.

As this is Richard’s thread I’ll back out now I don’t want to be a budinski.

BTW, Gerald & Robert, a friendly thank-you for all the work with BBB. I’ve learned a few things along the way and I appreciate your efforts.

Sounds like you may have an issue with your board. You can always send it in on an RMA and we can look at it.

The beaglebone had a power up issue. Rev A6A fixed it:

From the wiki: “Changed C24 to a 2.2uF capacitor. This extends the reset signal to solve an issue where some boards would not boot on power up.”

I have around 40 beaglebones running and this was a pretty serious problem for us. Our users guides have a somewhat embarrassing “If the board doesn’t boot, unplug the power and wait 10 seconds.” I have around 20 Rev. B boards, and I haven’t seen one fail to power up.

You could always rework the board yourself!

Here is my solution for RS485, without direction control…
MAX13487EESA - AutoDirection RS485 IC
100% functional and simple 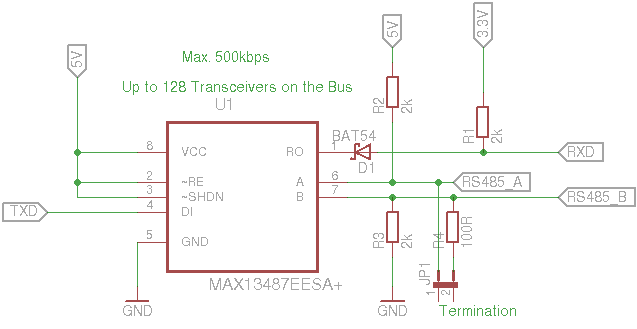 Sounds like the explanation to me. - thanks for that.

… I don’t have the skills to rework the board so I’ll just put up with it. Not a huge issue for me.

You will never read anything from this chip. What’s the point?

when RO is Low (RO is switched internaly with tranzistor to ground) 3.3V from R1 is Grounded and RXD is Low
when RO is High, 5V from IC is blocked by diode and RXD side is 3.3V High from R1