why BBB died? datasheets/multimeter seem to indicate it shouldn't have

I’m using a ULN2003AN to actuate a 24V/3W solenoid valve. After I set pin P8_11 to HIGH, the solenoid clicked and its power led turned on, then the BBB died. I tried turning the BBB power on again, but all that happens is that the power led flashes briefly. I had checked everything w a multimeter before hooking up the system. The solenoid is 177 ohms; hooked to 24V, it reads 0.151A – which is under ULN2003AN’s .5A max and matches its datasheet (AVS-5322-24D on http://www.automationdirect.com/static/specs/nitradirectionsolenoidavs5.pdf).

There shouldn’t be a problem. And the ULN2003AN isn’t broken. The BBB and transistor worked fine for a more expensive solenoid valve (VUVB-L: http://www.festo.com/net/SupportPortal/Files/17267/Ventile_en.pdf). I’ve tested it with that valve and the multimeter read 374 ohms; hooked to 24V, it reads 0.062A.

I don’t understand why the BBB died. It shouldn’t have because I was careful about checking the datasheets and then w the multimeter. Would someone please tell me what went wrong? I can’t see any mistakes. 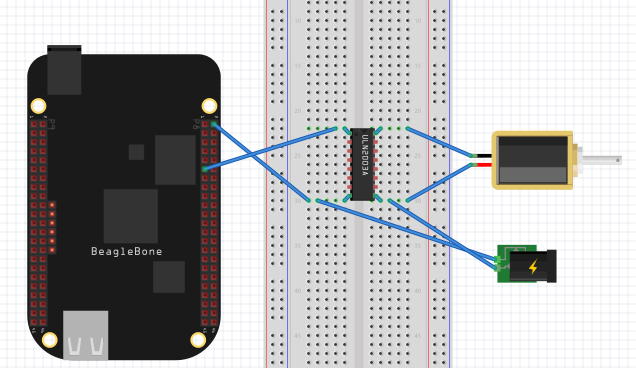 It’s hard to tell without looking at the ULN data sheet, but the ULN may have drawn too much current from the port.

You may have to use a buffer and/or a level shifter to drive the ULN.

I took a quick look at you fritzing drawing and the data sheet.

If the drawing is accurate then you have the ULN connected wrong.

Also, that device is designed to be driven from at least 5V logic, so you will need a level shifter.

When I get a chance, I’ll try and draft up a quick schematic for you J

My guess is that the inductance of the solenoid caused a voltage spike to occur when the solenoid was de-energized. There are diodes in the ULN2003 to shunt the spike, but they may not be fast enough to protect the fragile 3.3V outputs of the BBB. Also, the action of the diode is slowed down by the discrete proto board wiring, vs. a PCB trace.

The safest way to connect inductive loads like a solenoid is with a digital isolator, or other isolation component. The Analog devices ADUM1100 is a part I have used successfully in the past. You will still need the ULN2003 to handle the solenoid current, but the ADUM1100 should protect the BBB output pin.