Hi,
I am using Beagle Bone Black, Debian Buster image, updated kernel to 5.10. installed on eMMC.
When I use:
apt update
apt upgrade
the system updates Debian packages but down downgrades the kernel to 4.19.
Is it possible to avoid the downgrade of the kernel or get updates for the running kernel 5.10?

Thank you for your help.
PP

Hi @ppBBB , the kernel meta package for 4.19.x might be installed, check with:

Hi Robert,
thank you for your fast answer.
I am using the BBB with python3 without any capes, just as communication base.

I would like to switch to Debian 11.x, because it has newer python versions and other more updated packages.
Do you think it is already stable enough for 24/7 use?

it’s been working fine for me… But use a fresh image, as i’ve moved everything to systemd-networkd, so there is a lot of churn if you do a dist-upgrade…

The BBB will be finally installed in a location where I can access the system via ssh, but it will not have a direct connection to the internet (for later updates etc.). I have seen in the general discussion that more than one kernel can be stored on the system. How would it be possible to switch between these stored kernels in case issues occur. e.g. try kernel 5.15 in case of problems downgrade to 5.10.

Which tools do you recommend to make a backup copy of the sd card to hard disk. (Windows 7, …)
Balena etcher has no such feature.
I found USB Image Tool.

I use the WIN32DiskImager. The attached photo shows it making an image of the sd card from a BeagleBone Black. Finally found a use for one of my Beagles since the 3D printer (Replicape) and the MachineKit were a bust.

This uses an older version of the OS with the SLOTS which I’m totally happier with. Was able to recover the contents of a 40MB (yes Megabyte) ST506 hard disk drive onto the microSD. Now the board is wired to replace the 40 year old hard drive.

I’ll likely buy a couple more PC boards and populate them to use up the other two BBBs. 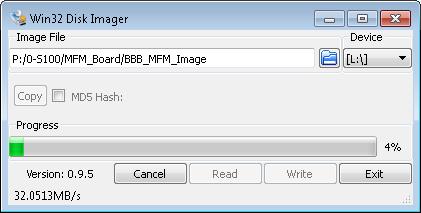 Hi,
I have installed debian bullseye image as a fresh install.
As mentioned some days ago above I used in the past the flash files in /opt/scripts/tools/eMMC/
for flashing to eMMC or saving the eMMC image to sd card.

Now I have seen these scripts do not exist anymore.
I want to flash sd card or eMMC as normal sudo command. I do not want to run it from uEnv.txt.
Do I have to install a package or scripts to get functionality back or make files executable?

Thank you for your help!
Regards

Here’s the debain package files for that, that is preinstalled.

repos.rcn-ee.com. Contribute to rcn-ee/repos development by creating an account on GitHub.