I am running Ubuntu 18.04 inside a VM using VirtualBox hosted on Windows 10. I am trying to use a PL2303HXA serial to USB cable to get the serial output to my terminal in Ubuntu. I am doing this to view U-Boot.

Whenever the serial to USB is connected, the board doesn’t boot up.

When the serial to USB cable is connected and I run

the terminal waits for data on the port. As soon as I try to power up the board with the micro-USB cable, I get a fatal error and the serial port connection gets lost.

The board boots up only when the serial to USB cable is disconnected from the PC.

I tried to connect the serial to USB after powering up the board and that powers off the board. I am not sure why but the two connections (serial to USB and micro-USB power cable) seem to be mutually exclusive. I would appreciate any suggestions on how to resolve this issue.

I don't know how VirtualBox handles USB devices -- if they pass through
to the guest OS as raw devices, or if VBox is intercepting the guest I/O
and mapping through the host OS...

Virtual Box support of SUB driver’s was squirrelly 2 years ago.
If I’m not mistaken at one point Mr Robert refused to support builds.

Try disabling the driver in win10 before starting virtual box before starting VM then in Linux VM check which try enumerated and connect to it was the fix I think. With multiple USB devices it would change if I remember and you might Google which VB version supports SUB best, Again that was several years back
This phenomenon was easily found and described by googling

Did you try this using a Windows serial terminal as well?
Your fatal error is in linux terminal in virtual machine
Let us know if there is a difference and use a powered hub or power supply as was suggested

I got to know that the driver is no longer supported when I first connected the cable. The driver still seems to work though. 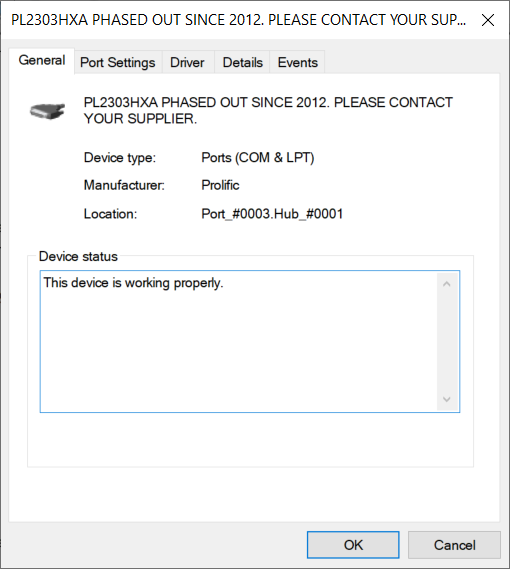 Also, I added filters in the VM’s settings and that is how picocom was able to connect to /dev/ttyUSB0.

I did try using MobaXterm on Windows to connect to the serial port. That didn’t work.

I got the below error: 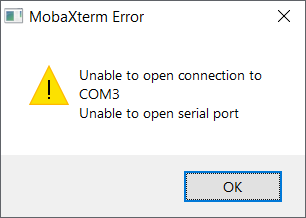 That error you are seeing appears to come from your USB to Serial interface.
Note:
http://www.prolific.com.tw/US/ShowProduct.aspx?p_id=225&pcid=41

Thanks Jon, for the link. I tried modifying my current driver installation. It still shows the same error.

I got a DC adapter to power the board. Although the serial connection does not get dropped on powering up, I do not see the bootloader loading.

Some time back, I had managed to get access to the U-Boot bootloader on the serial terminal with the USB power itself. It didn’t show up again. The behavior has not been consistent. Presently, the serial connection drops out if I try to power using USB.

I would appreciate any inputs to solve the issue.

I found out the issue. I had used the wrong connections; connected 5V instead of ground!

After using the right connections, it worked even with the USB power.