I’m looking for a recommendation for a GPS / compass combination for the Beaglebon Blue, preferably in Australia. I have purchased a ublox neo-m8n for Pixhawk but the connectors are DF-13, not JST-XH which is a problem.

I could cut the connectors and replace them, but I’d rather go with an off the shelf solution ideally.

I am in a similar place, what GPS did you use and how did you connect it to BBBlue ?
Thanks

I went with the ublox NEO-M8N and a set of of ZH connectors in various pin counts and then modified to suit.

Ultimately for my project though, I plan on making an interface PCB with the appropriate connectors (GPS, compass, LIDAR etc) and have JST-ZH connectors coming from that to the beaglebone.

Let me know if you want the colours for the wiring.

It is backordered now but who knows?

P.S. I have one that is working and is used w/ an older GPS example from beagleboard.org and Seeed-Studio.

Thanks very much for the response. I just ordered the ublox NEO-M8N and now need to know how to connect it to the BBBlue board (ports and wiring)

Is there a datasheet showing the NEO-M8N pins/wires coming out of the module? If so, you can just alter your pins to match this pinout. 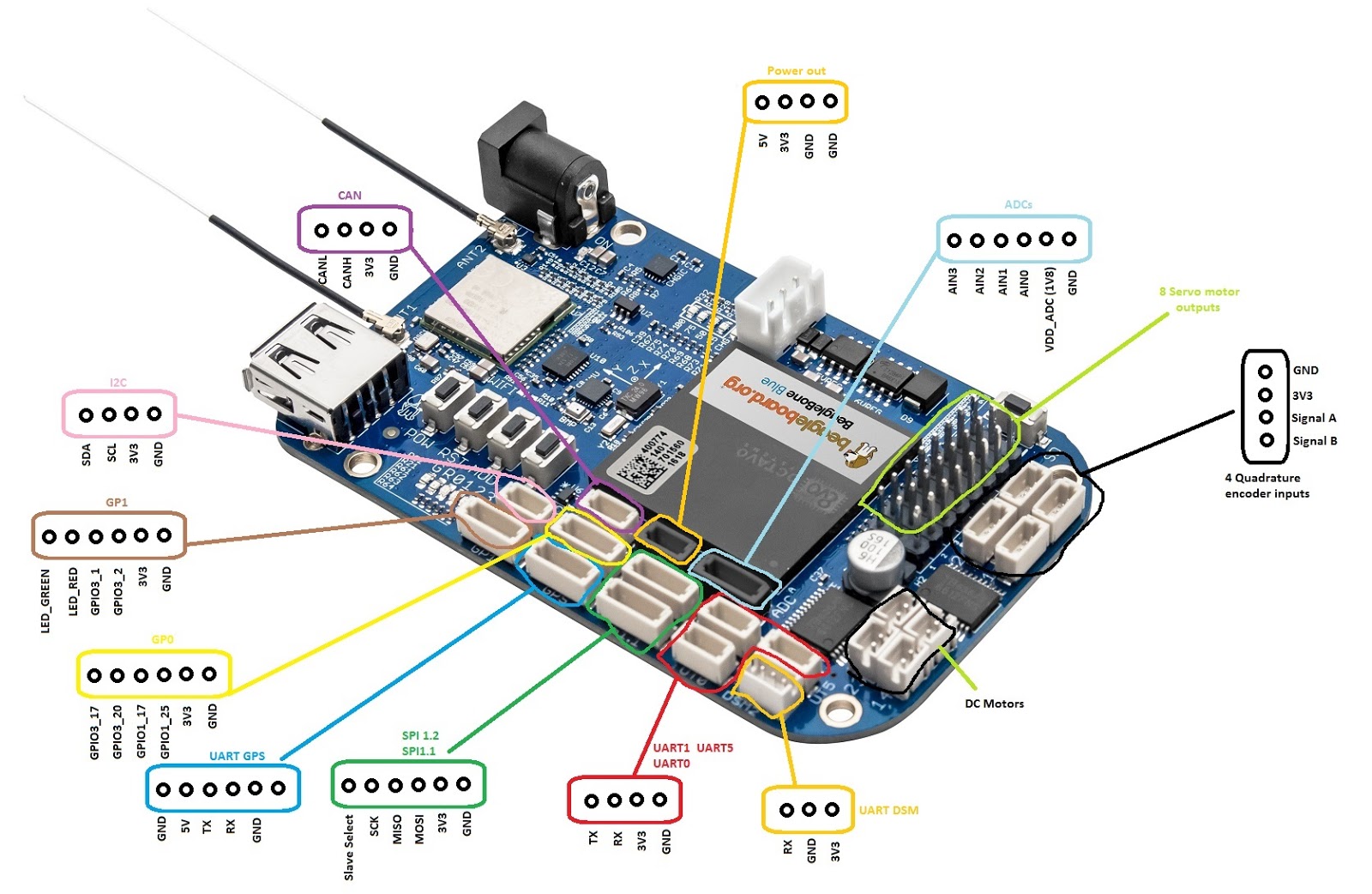 The UART GPS pin is the pinout in question.

P.S. Just remember to use RX from the module to the TX on the BBBlue. Also…hopefully you purchased the 5v version of the NEO-M8N.

I’ve been busy but will write up a ‘how to’ shortly. My last M8N died at about the one hour mark, so I’ve attached a photo in the meantime for the wiring colours which should hopefully help.

I wouldn’t worry about the voltage, was running the last one (I bought 2 of the M8N with compass) and it runs fine from 3.3V

The connectors I purchased were 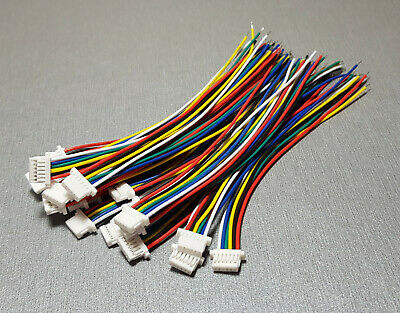 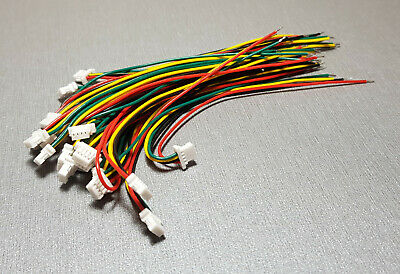 The photo I’ve included and the photo Silver2row added should hopefully get you on your way (use the port with the blue mark ‘GPS UART’ for the GPS and pink I2C port for the compass).

In case you’re not aware, the wiring in the photo is (top to bottom):
Power (for both GPS and compass)

The top 4 should be on one connector (UART) and the bottom 2 on a seperate connector (I2C). I cut the connectors off and splice / solder them to the JST-ZH connectors.

Let me know if you run into trouble, otherwise I will add a more detailed how-to when I get the chance.!

Thanks to both Silver Row and DirtFarmer !

I should be able to get it working now with a bit of soldering.

I’m just starting my project. Hopefully I can return the favor to you folks someday.

Not sure how you folks fared with your respective GPS units but am fairly certain the one in the image posted by DirtFarmer is identical to the two units I purchased some time back …and subsequently discovered they both had fake ublox chips inside with flash memory size that prevented update to latest firmware.

Now it may be your GPS units will serve your purposes perfectly, and especially so if upgrade to latest firmware is not needed/warranted …in that case ignore the next part of this post.

So (historically) I found a thread on similar GPS units here: M8N-GPS-list-of-fake-good-and-original where I discovered a solution is to upgrade the memory chip thus allowing a firmware upgrade to complete successfully. I documented my efforts at post #30 of that thread and both my units now have the latest firmware. At the time I was only able to source rather ‘chunky’ memory chips hence my metal fabrication efforts. A later poster on that thread provided information on a better alternative memory chip at post #39.

I’ve not had any spare time lately, but will look into flashing / your advice when possible.

I am not sure if I posted this one yet but here: https://www.sparkfun.com/products/12751

It fits directly into the GPS Socket w/out work arounds w/ wiring and other drivers.

P.S. It seems the Nov. 4th, 2021 post by me states this fact but reup. There you have it. If people are wondering what happens w/ the GPS on the BBBlue, that one will work but there are no antennas for testing indoors. One would have to go outdoors. I know. Anyway, it works and the GPS is fickle at times, i.e. depending on how you power the BBBlue. I also remember that the GPS port on the UART Channel on the BBBlue stays on. No off and no on. Just on. So, it works until the unit is powered down.

@silver2row - thanks for the product link, especially the fact it can plug directly into the socket on the BBBlue. I haven’t tried my GPS module on my BBBlue as yet, mostly because am in the process of exploring whether it’s possible to utilise a more recent image/kernel combo …hence my post at debian-11-bullseye-testing-images before going further.

For both of you, just curious as to what sort of usage you plan for your respective BBBlue? I bought mine around the time my son and I were starting to build our first quad-copter though I confess the BBBlue was among a number of controller options where we ended up with a navio2, a BBBMini (probably wont use this) and a spracingf3evo …none of these have been used yet though the spracingf3evo is ready to go pending some more work on the quad frame.

Seth here. I think everything works but I have not been able to take time out to understand how much Open Source work has gone into ArduCopter/ArduPilot in general. Oh and for the use of the BBBlue, the first idea that came to mind when purchasing it was to use it generally…

Ever since a young tot here, I wanted me broken electrical system fixed. Guess what! Not only did it not get fixed, it was replaced w/ Legos, i.e. circa '85.

So, years passed and letting go was a thing for me. Now, I am in “full” control of myself for a change.

I wanted to try an electrical arm of sorts but never got around to it. I got the servo to work on the Servo Headers on the BBBlue w/ the librobotcontrol library w/ kernel 4.19.x.

Updating should take place at some point. I think it was unpopular and missed a mark in time. It is an awesome lib. and has many tasks to take on.

P.S. I could go on and on. I am making this brief. It is a cool board, w/ tons of promise, and not only does it have the infamous am335x, porting to ARM in recent times have been easier than ever for specific 32-bit libs. Anyway, my infamous joke is just that…a joke. I like learning more about what currently I am using to produce ideas, libs, and assisting in routines. So, building on librobotcontrol should take place in my mind, e.g. whether for a newer 64-bit lib. or for keeping on w/ the keepin’ on. The BBBlue and the librobotcontrol lib. rules. W/ the newer kernels…anyway. Sorry. I told you. I can keep going.