I was able to get everything to build and begin to boot. Here is what I am getting form the serial console:

I have some spare cycles and would love to help support as much as I can to land all the sources and push toward an upstream build root release. Let me know how I can help.

Hi @mobileoverlord let me update that repo, it’s a little behind on what we now ship in u-boot for the bbai64…

Thanks Robert, as an update. I was just able to get it to boot from sources I built, the problem was that I was using a squashfs root file system and the SPL was trying to load j7-mcu-r5f0_0-fw from /lib/firmware in the rootfs. Could you also inform me where I can find the fw blob sources? Are those in the ti-linux-firmware repo?

Here you go… Everything in one build script… (including where to get `ipc_echo_testb_mcu1_0_release_strip.xer5f’ 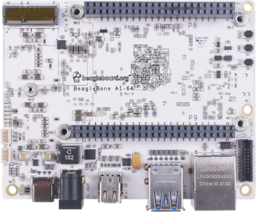 I was just able to get it to boot from sources I built, the problem was that I was using a squashfs root file system and the SPL was trying to load j7-mcu-r5f0_0-fw from /lib/firmware in the rootfs.

Edit here are all the firmware files we ship, initially these where all symlinks, but that broke boot, so i leave as *.tisdk extensions… Thus they aren’t used… so to actually enable them, you need to remove the *.tisdk extension…

I get them by building ti’s yocto image:

I updated all my sources to the branches and tags that you mentioned, except OPTEE, I was able to build and boot using the latest version. I am unsure what modifications are being held in the bbb.io sources for opt, but it was missing dependencies when I tried to build it.

Its still trying to load j7-mcu-r5f0_0-fw and fails if it doesn’t exist without the tisdk extension in the rootfs. What part of the boot stage is trying to load these firmware blobs? Is it UBoot on the R5?

I see where that line was added. It turns out that I neglected to add DM=<path to ipc_echo_testb_mcu1_0_release_strip.xer5f> when building U-Boot for the a72. I no longer include the firmware files and it is proceeding. Thanks for the help!