Hello mentors and beagle-gsoc students, in this thread I’ll keep my progress reports every week for bone101 project " Improving Bone101 experience".
I’m having my exams going on this period and will finish by June 4, So I may not be fully committed now and I’ll dedicate full-time to this project after next week. and here are my progress for first week

1- debugging html-proofer for Travis.
2- fixed some errors in styles and html pages.
3- create separate breadcrumb file to be included with bonescript examples.

so I commented it in travis, and the same for make test as no makefile right now.

1- Updating some old libraries that cause errors now in bone101 and BBUI.
2- Sart working in BBUI re-implementation.

2- reading BBUI code… and starting to draw the graph.

Started reimplementation of BBUI, I was stuck in with canvas dimensions, but I got it and started to fix old positions to the new structure, then I went on drawing graph XY axis, deleting negative scale, and resize it to have 4Volts and also draw the graph buttons (play, stop, zoom in, and out), I followed Jason advice on making some changes to the graph like precision and position of the zero point. I also fixed the welcome area dimensions. 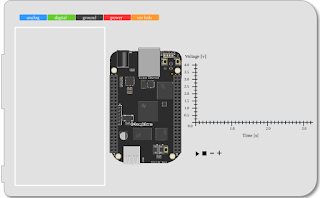 I went through Events, and continued working on UI, I managed to understand much of new lines in current implementation and added the following functions:

The user can now drag a button into the graph and see an alert text to choose the pin, and on hovering over probes he gets the corresponding highlighted pins on BB. If he doesn’t select a pin the probe is removed.

I’ve gone more into UI, this week I fixed an old issue in dragged button and added some new components:

Please note that these components are not necessary to show an output in gh-pages UI, but will later be used in Events functions to wrap all the functionality together.

My Dear mentors, I apologize this week for not having a big progress, I will make up this the next week.

What is done:
fixing the highlighting issue on dragged button. User now can drag a button to graph and see the pins highlighted. if click outside everything is cleared and he has to choose the button again, the same scenario like the old BBUI.

Issues:
I tried to highlight pins being hovered, by using the function that draws a lighter background on the hovered pin, but the event listens for ‘mouse move’ which keeps drawing this background over and over again while moving the mouse over pins and ends up the pin is ‘white’ colored. I do think that analogy of Events here is different than old implementation. Jason asked me for a state diagram, I’m working on it and will update you in report.

Dear Mentors, I discussed my college graduation project, and I have now more time to spend on GSoC, I’m still working on BBUI and I’m blocked at some points. I become familiar with the structure and code, and I can go easily to add and edit what is supposed to complete, but I need some help, I need a follow up on my code progress and a review of current states analogy to decide whether the implementation is going in the right path or not.

here’s my try to draw a quick state diagram of what BBUI supposed to do : 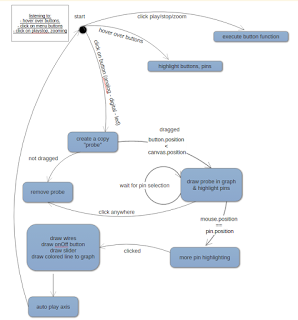 Issues:
I was waiting for a state diagram to make everything clear and put BBUI in the right working path. I have just seen an attempt by Jason, and will need to review it with him in meeting.

- I got the outlines for the python integration phase, and start arranging functions prototype, the current status is to write the functions in bone101 page, let the user click on ‘start’ button after writing the code into the text area, and running it on beaglebone, if he clicks on ‘reset’ anytime, the process will terminate/stop and the python file would be removed. If there’s an output like a print statement, it would be sent back to the user in browser, I’ll have to figure the stdout, stderr, stdin.

Issues:
Slider bar in BBUI would be discussed today in IRC with Jason.

Preparing functions of Python phase, and continue working on BBUI.

I’m on travel today and will have limited access to IRC. I can be available Friday morning US time.

I’m online now, please tell me when you’re available, thanks.

I spend three days this week stuck trying to get my beaglebone work, I received a solution by Wormo, thanks for him. I created a new image on micro SD card, and get my bb work again. So I’m able now to work with bonescript code and examples.

Python Integration:
I created a branch on bone101, that is “python-integartion” and started to add the UI for an example that would some up the python integration phase.

Preparing functions of Python phase, and making some patches on BBUI if possible.

Improving Bone101 Experience : the project aimed to improve the experience of Bone101 to make the most use of it to be friendly to novice developers, allowing them to work with BBUI inside tutorials, write python code beside Javascript, and provide some integration with Cloud9 IDE.

This fixes made got me deep with project files understanding the role of each directory and file, and I was happy to enhance some of html code by writing a module for breadcrumb that it can be used with BoneScript examples. Here’s what got merged by Jason Kridner : https://github.com/jadonk/bone101/pull/38

The first phase of my project was to reimplement the BBUI, the new structure was separated into four main objects : Canvas, UI, Events, and Hardware.

I think this phase took much time and wasn’t an easy task with the available code comments and support. I started reading on Canvas and learning about drawing in contexts, the first thing was to draw the missing elements and reposition objects, then I went on BBUI as the scenario users do to get it done.

Here what I managed to do :

I want to say that even I got stuck many times with BBUI at first, but I was happy to get into the code, see things work, writing patches and change states. The final integration of components made me more confident toward the current implementation. Thanks for Jason to provide state diagram and code reviews, I would be available after GSoC to do new patches and provide updates to see BBUI full functional.

This phase was investigated in the beginning and found out that it’s not possible to view and run bone101 examples in Cloud9 IDE. The only thing that is available in Cloud9 API is to create a button that could open specific URL in the IDE, that could be the bone101 example page, but there will be no direct communication between the page examples and cloud9 runner. Therefore, there’s no implementation done in this phase.

I would like to thank my mentors, and everyone who supported me or provided help on IRC, this is unforgettable experience being in GSoC and working with such great people.