Having to manually start Wifi

I have been trying to get wifi to work on the latest debian image. It does work but requires me to manually start it after logging in. If I log in and type ‘ifup wlan0’ It works fine. Even putting ‘ifup wlan0’ in /etc/rc.local does not work.

Here is a link to my etc/network/interfaces http://pastebin.com/37AjV6tG

Any help would be appreciated.

It is a boot order problem.
I reported it a month ago, or so.

Debian is trying to start WiFi before the USB interface is fully up, therefore it fails.

If you wait until after the USB interface is fully up and running, you can manually start the WiFi.

Or, write a systemd service to start it automatically. I found waiting until 30 seconds after
the start of boot worked fine, to have systemd start WiFi successfully.

i found out that ‘allow-hotplug’ made wlan0 start at startup. here’s how i setup my interfaces file…

Thanks for the reply. I will try Fredrik Olofsson’s solution first but if that doesn’t work I will use the systemd method.

UPDATE: Fredrik Olofsson’s solution worked for me. I left in my auto statement as well.

Hello Graham,
I have problem in getting stable wireless connection on BBB. I asked this quiestion yesterday, but then saw your answer here. Tried to force systemd service to start running after 30 sec as you said. And edited my service like this
` 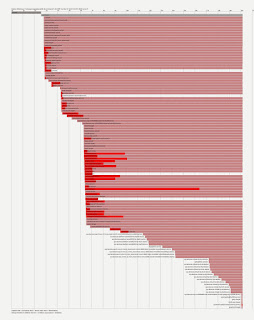 To be sure that this new service started runnning after the 30sec I did systemd plot. As you see ifupwlan.service is not waiting for 30 sec. To achieve this result I also have tried systemd.timer but no use. I will be very glad for your advice.
Thanks in advance.
Regards,
Upol

To get a reliable start of the WiFi service with jessie, I did the following:

1.) do NOT uncomment the wireless enable/start lines in /etc/network/interfaces.

This would try to start up the WiFi before USB is up and running and stable.

Apparently, once “wpa_supplicant” gets the error, it will not try again.

2.) I wrote a file named wlan0-start.timer, that waits 30 seconds after the start of boot, which

ends up being about 5 seconds after the end of booting.

This service is started when the .timer of the same file name is satisfied.

So, it appears that the normal .service dependency ‘WantedBy=multi-user.target’

does not wait long enough for the USB subsystem to be fully running.

If you try to start “wpa_supplicant” without the USB subsystem running,

it fails, hangs, and will not respond to later attempts to re-start.

If you can find the right dependency for wlan0-service, you might come up

with a simpler solution.

I gave up looking, and just wait 30 seconds (which is after the start of boot, not

the end of boot) which gives USB subsystem time to come up, and then

start the Wifi sub-system, and everything works.

This is not the optimum solution, but it does work.

Graham, did you try Fredrik’s solution? It works fine for me though left the auto wlan0 line in the interfaces file.

I have not tried it. No time, yet. It seems like a much simpler solution than mine.

What I intend to do is look in the .service file called by Frederik’s solution, and

see what that uses for dependencies they used for starting the service.

Hello Graham,
Thank you for your help. I re-implement systemd-timer service as you suggested. But service that timer expected to start after 30 sec , just starts after 4-5 sec after I start timer. So I just ended up to put “sleep 30” in my script. Now (at least 3 times I tried) it has got its’ static IP. Btw in interface file I had not got any “auto wlan#” line.

Hello Nathaniel, my interface file always have contained “auto-hotplug wlan#” at the very top of the file but I had still had a problem in making the wireless stable in BBB (rev C). Or should this line come after the wpa_supplicant.conf command?

Since you are using Jessie images, have you tried using ConnMan to manage the WiFi connection rather than resorting to all of this systemd and ifup/ifdown stuff?

I use the ConnMan method all the time for my work and have no problem getting a WiFi connection after boot using my TP-Link TL-WN-722N (uses an Atheros chipset), Jessie snapshot images, and 3.19.x kernels.

Thanks for the pointers.

I will go read up on it.

This solution worked great for me on an image from a few months back. I highly suggest taking this route.