I’m not sure I’m in the right place to post this, but honestly I can’t find anywhere else I might be able to get some answers.

I’ve had several errors during the make process, and I will post screenshots in case those might be beneficial.

But ultimately what seems to be my issue is something missing during the dependency installation. gcc-arm-linux-gnueabi.

In apt I found gcc-arm-none-gnueabi, and that didn’t solve the issue.

I also found the .deb of the original gcc-arm-linux-gnueabi. I downloaded it and attempted to install with both apt and dpkg.

Apt cited dependencies. I didn’t check all of them, but several that I did check were already on the system at a higher version number.

Dpkg tells me I need armhf architecture, which the file in question doesn’t have an any arm architecture other than .arm64, which is what I had downloaded.

Is there somewhere to get this file I haven’t been able to find?

Or a possible workaround for it?

I’m at my wits end, any help will be greatly appreciated! 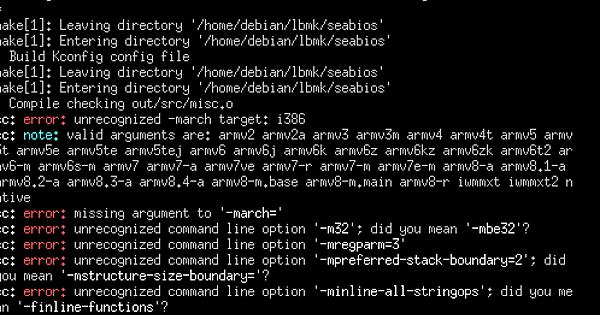 What directions to build this are you following? Looks like it’s defaulted for building x86, you’ll need to change that in whatever build/configure/makefile/etc it uses…