Beaglebone rev A6 board just arrived.

I followed the adafruit tutorial (on a win xp machine) although this document refers to the old non FTDI drivers . The 3 drivers of BONE_DRV.exe installed as shown. I found it had installed 2 serial ports in the com port list. . I didnt get "beaglebone " “disk drive” or “beaglebone USB serial port” pop up as added hardware as shown.

It also wanted to install a SUBARTIC device but couldnt find the driver. Now when the board is connected without the SDHC card the PC bing bongs every 60 seconds and the device comes and goes from the device manager list. Most irritating. It bing bongs even if I uninstall it or disable

Probing around i found one of the unimplictly named serial port (8) did allow me to connect by USB and do the USB and ETHERNET tests of the tutorial without issue.

I did download and install ccs5, ccs521 was the version offered by TI, but that didnt solve the quest for SUBARTIC driver

Suggestions would be appreciated on:-

Where are the SUBARTIC drivers for rev6?

Can i get the serial ports to identify as beaglebone as shown? Should they?

You are not alone… my Adafruit sourced BeagleBone arrived in August and my attempt to get the FTDI working so I could console into the bone form Windows7 failed; the software stated it installed correctly, but the expected USB or COM port did not appear (it was several weeks ago, so I don’t remember well). I’ve had no problems with the SheevaPlug console driver that shipped with the SheevaPlug two years ago, so it can be done. I figured installing the drive shipping with my BeagleBone would be a snap; it wasn’t. Rather than spend more time on it, I was able to connect from my Gentoo laptop using minicom. I thought I’d speak up to demonstrate your having a problem with the Windows console is not an isolated instance.

I’m not sure why your Beaglebone is looking for a Subarctic driver: that’s never happened to me. Based on Google results, it looks like that driver has something to do with JTAG debugging when you want to develop native code (i.e. not Linux code) on your Beaglebone. If you installed TI’s Code Composer before the Subarctic driver requests began, then that’s probably the root cause. I installed CCS long ago (and never ended up using it), but I dimly recall that the installer had a bunch of JTAG debugging options.

As for the serial port problem, I don’t have any first-hand knowledge of trying to fix a problem with the BONE_DRV drivers. Based on what’s on the CircuitCo page (http://circuitco.com/support/index.php?title=BeagleBone#Revision_A5), it looks like a hardware change was made in Rev 5 that affects the USB drivers, but my BBs are older than that.

However, if you haven’t already done so I’d suggest you uninstall your current driver package and reinstall it using the link from the Quick Start page http://beagleboard.org/static/beaglebone/latest/README.htm. (It appears that the Adafruit tutorial links to the same driver executable. If you’re running the 64-bit version of XP, be sure to install the 64-bit drivers). I don’t have XP, but on Windows 7 x64 but for what it’s worth my drivers look like this in the “Remove Programs” list:
http://www.gigamegablog.com/wp-content/uploads/2012/09/9-9-2012-1-00-47-PM.jpg. The VCP drivers is the one that should provide a Virtual COM port when you connect the Beaglebone.

If that doesn’t fix the problem, you might find the following page useful for checking to see that the Beaglebone USB-to-serial drivers are installed, and for hunting down and removing unused USB drivers that might be interfering with the Beaglebone drivers: http://www.rttycontesting.com/lagniappe/removehiddencomports.html

add me to the subarctic club; not that i join willingly.
i had this problem initially when i first powered on my a6 version of the board. then, for some unknown reason it just went away.
and now, for the same reason, it is back again.
i have followed all of the suggestions from this forum and others; but nothings seems to work.
ccsv5 debug works fine through xds100v2.
but instead of a virtual com port, i get the “subarctic” unknown device.
below is the usbview of this unknown device.
i would really appreciate some help in getting the vcp back again.

Gerald, This explanation helps; so we can ignore the subarctic unknown device.
However, there is still the problem of the missing vcp.
I have attached two screen captures of usbview which shows two usb devices attached to the hub; but not three.
The vcp is still among the missing. Is it possible that some bit got flipped on the board that logically removes the
UART0 port from the ftdi chip?
Thanks, Jon
ps there are no other errors or warnings showing on the device manager.
pps windows 7 64 bit 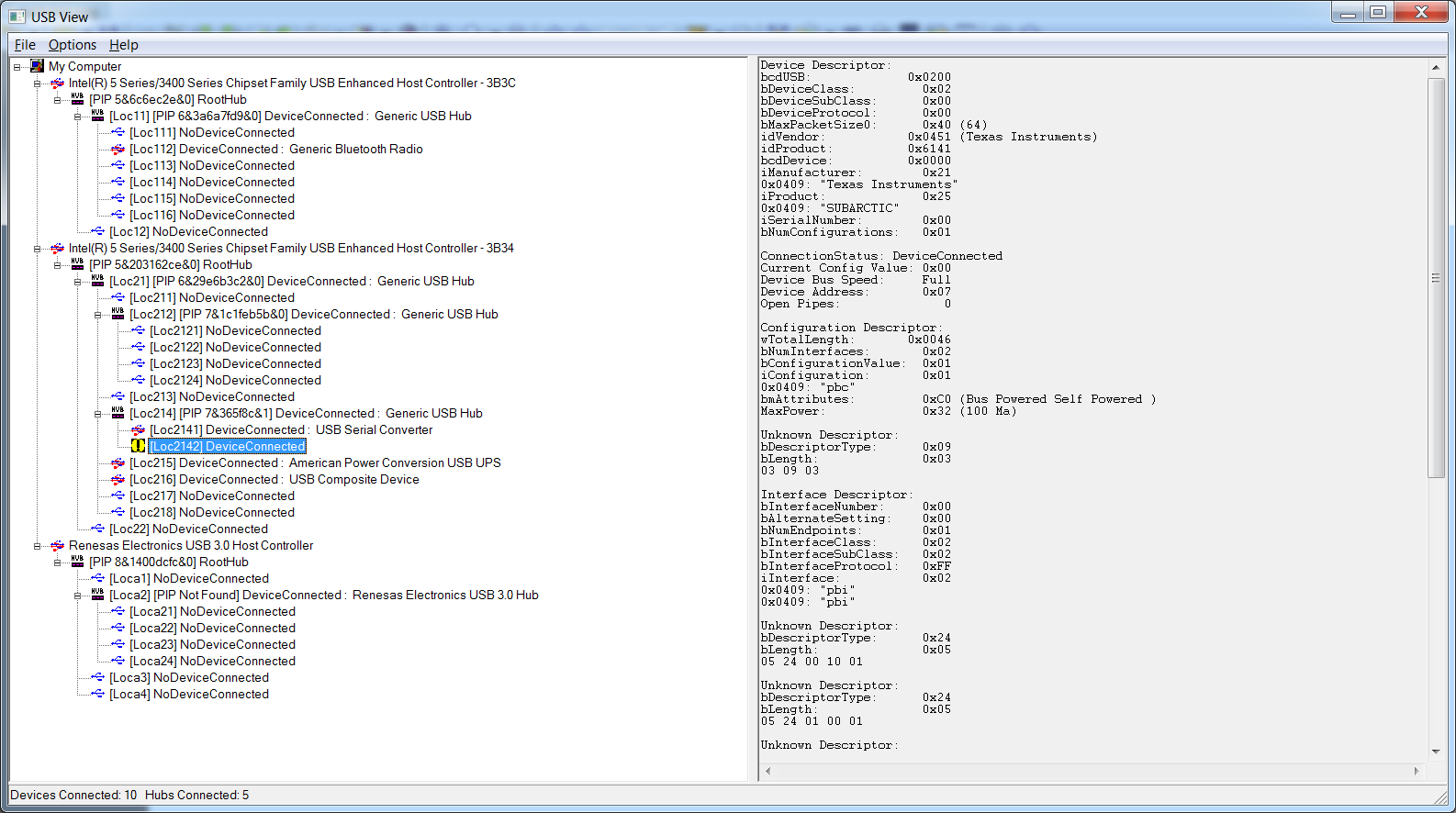 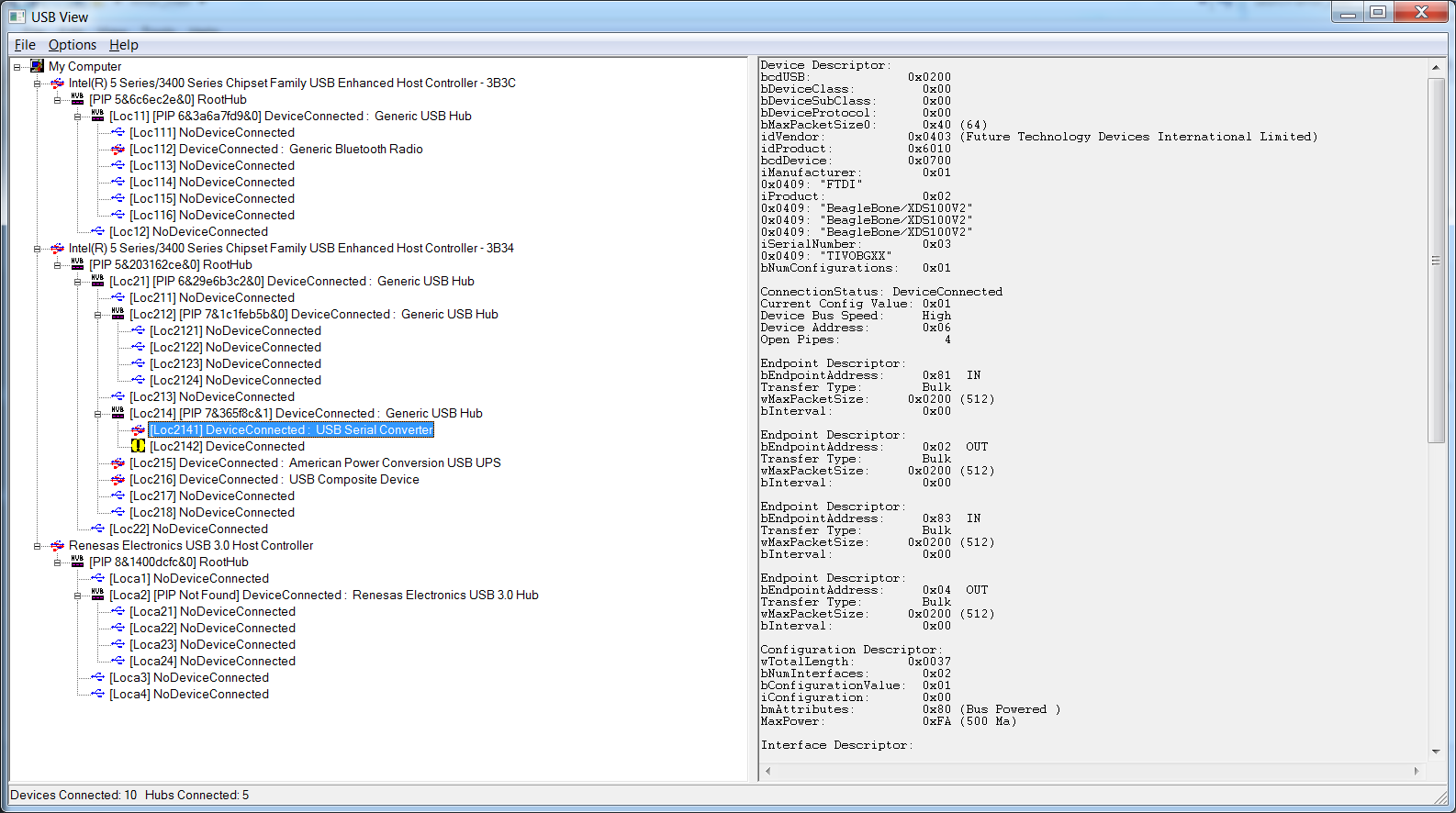 There is nothing in HW that changed on A6 that would affect this issue. So, if anything it has to be something in the SW update. There are no bits that can be flipped via a HW change.

The USB port is not showing up because it si not loaded. Once the board boots the kernel then then it should show up at that point.

You might try using the A5 image and see if you get the same issue.

I know I am driving you crazy, but I do appreciate your help.

The 1st device is a “USB Serial Converter”. If you note the “name”, it is “BeagleBone/XDS100v2”. This is the JTAG interface.

So I still think the UART0 interface is missing.

I have included a screen capture of the device manager. When the UART0 device was present, it appeared at COM10.

You will notice there are no virtual com devices shown (beyond the Bluetooth ones: BT……).

Also there is only a data SD card plugged into the board – not the distro that came with the board.

The device used to power up, with the usb cable, and the print CCC… on the virtual com port which was available when the

Board powered up. So I am still lost as to what to try next. 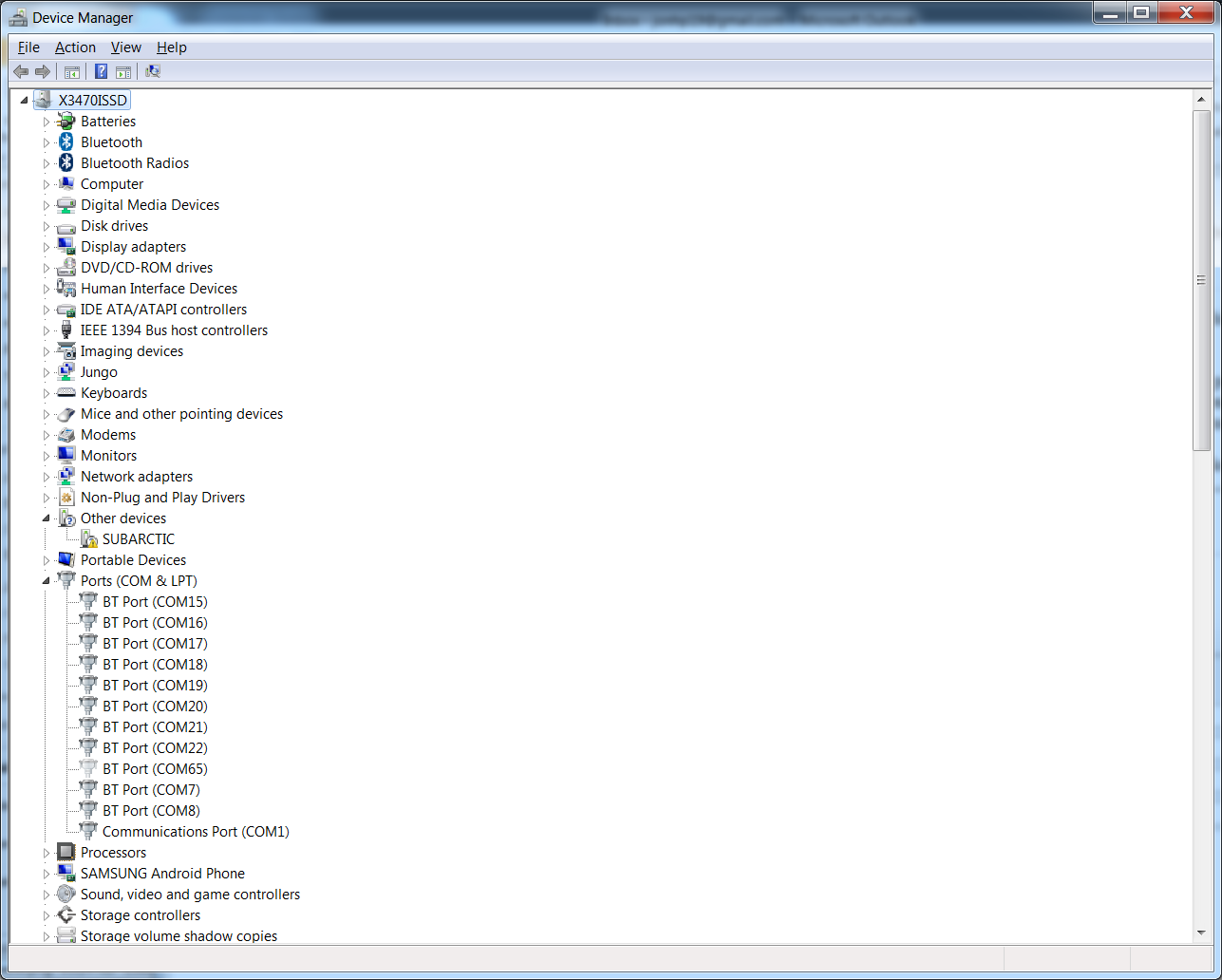 If you just plug in the data SD card, then you in affect do not have a board. No SW is running the board except the ROM code looking for a boot source, which explains why it is looking for the SubArctic serial drive. In other words, you are not using the board as it is intended to be used. You need to allow it to run some actual SW to really work.

If it used to be working, it is hard for me to visualize what has happened. So, your best bet may be to send it in to the factory and have them look at it. Unless you have written over the on board EEPROM or the FTDI EEPROm. I am not sure what else may be the issue here.

I would definitely put the SD card back in and use it as intended to see how that behaves to see i fit changes.

Otherwise, request an RMA and have them look at it.

I put the provided SD card in and did a reset:

I get a “BeagleBone Getting Started (F:) drive in windows.

However, the device manager still shows NO serial port for the device even booted from the shipped SD card.

I have not tried to alter the board EEPROM or the FTDI EEPROM.

I thought to take a look at the FTDI chip through FTDI – FT Prog.

So that makes sense; but not the missing serial port in windows.

PS I am loading code through CCSV5 using the USB JTAG interface and that works great.

OK. So other than the serial port, you are OK. The USB to Serial is the FTDI device itslef. There should actually be two serial ports that show up as the FTDI has two ports. One for the UART (Serial port) and one for the JTAG, but they should show up as two serial ports. The iCloud and storage device connections are through the USB port on the processor connected to the HUB.

I thought to usb cable the board to my laptop. After a few moments there was a com port and and

Our friend the unknown subarctic device. Interesting thing is that the vcp works on the laptop but

Not the desktop. I even see the CCC… on the laptop tty interface…

USB View shows the com port as a composite device.

The JTAG will never show up as a JTAG device Just a serial device. The CCS driver takes care of making the connection. It was a change to allow the standard FTDI drivers to work. That is where the PID/VID comes from, FTDI, instead of the TI PID/VID which would not allow the FTDI drivers to be loaded.

If you get the CCC then that is the UART sending the characters looking for a serial download device on the laptop from which to load the code.

So, it sounds like a driver is missing on the PC.

when the board is usb cabled, the device manager shows :

Other devices/SUBARTIC (which comes and goes over time; there, not there, there… as the device manager refreshes)

When the board is disconnected, then the Other devices/SUBARCTIC goes and stays away.

Ok, the way I read the install instructions for the FTDI chip is that the hardware has to ask for the driver and then you can point it to the correct folder.

I don’t see a way to just install the drivers before connecting up the board.

Clearly something is broken in the process…just not sure what…

I found an uninstaller on the FTDI site, off to try that…

Without a valid boot source, uSD, keeps cycling looking for some place to boot from. The USB connection is a valid boot location. If you look at the schematic, is shows the following boot sources:

MMC…The uSD card
SPI…The SPI bus
UART…That is where the CCC is coming from via the FTDI serial port connection
USB…That comes from the USB port on the chip via the hub, and where it attempts to install itself as a USB port looking for a driver.

If you put the SD card in, then the USB Subarctic will not show up, the serial will form FTDI. At that point you should be able to install the driver. If you go here [1] you can find instructions on how to load those drivers if you need them.

OK…we made some real progress.

With the board booted to the shipped SD card…

Since the FT2232H only appeared as a single device and not a composite device,

I decided to uninstall the driver for the USB2412 hub and then scan for hardware changes.

CCSV5 usb-jtag connects and loads up and runs the app.

Thanks for walking through this with me.

Glad you got it going. The issue here is that every PC has the ability to be a little diferent. It can be a complicated process sometimes!