No space on left device

I am newbie, I use the version buster of my BeagleBone and when I run my application on it, I get “no space on left device”

How can I fix that please ?

newbie's shouldn't be using buster.. It's still about 6 months away
from being released..

No, I will try that, but after I run that, The MicroSD must be usually put on the BeagleBone or I can take it off?

I mean after I run that :

The microSD must be on the BeagleBone for running my application or it’s normally when I take it off ?

That "script" only resizes the microSD in which the BeagleBoard.org
image you install via ethcher.io/dd/etc is located.

If you have another microSD with something else installed that has the
"No space on left device" issue, it's not our problem, and it's up to
you to either fix it or get a bigger microSD..

You mean after doing these commands

on the microSD which having the image of BeagleBone, I can write that on my BB ? 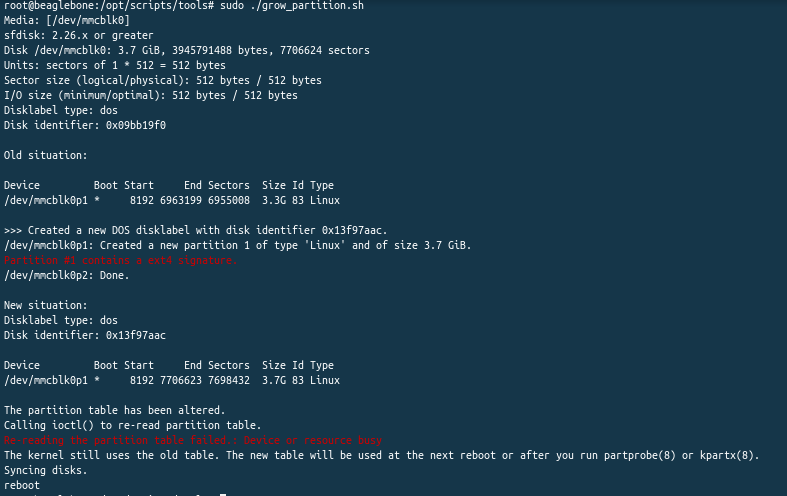 What do the directions say to do next?

What do the “Directions” : https://elinux.org/Beagleboard:BeagleBoneBlack_Debian#Expanding_File_System_Partition_On_A_microSD

Say to do immediately after running: sudo ./grow_partition.sh ???

That shows us, resize2fs ran and the disk is already maxed out…

PS, buster is still 6 months out…

Now, can I write the Buster image on the BeagleBone? will it stay maximized? I need that just for 2 months.