Prior to my experiences with Beaglebones and embedded Linux, my embedded experience has been with single-core microcontrollers (uCs) running RTOSs and JTAG stop-level debugging using special hardware like the E10A for Hitachi processors or the BDI2000/3000 for PPCs.

But even when doing more advanced debugging, we often developed a lot of the code on BBBs where there was a USB-exposed JTAG debugger built onto the board for doing things like this.

However now that I’m working with a BBAI64, I realize this is my first foray into development on a microcontroller (uC) with multiple cores. So do similar built-in debugging options exist or is additional hardware required?

One of the other threads I’ve read here recently make reference to mikroBUS. And I see a black caged connector next to the Ethernet port that is silk-screened as mikroBUS. This was the 1st I’d even heard of this and I had to google-search it just to be confident “mikroBUS” wasn’t a misspelling.

I also see a familiar TAG-Connect pad that is labelled JTAG/J11.

The presence of both of these ports leads me to believe that there isn’t hardware built onto the board for hardware debugging…or if there is, there’s limitations and caveats that demanded the presence of these additional ports.

So then I go into CCS and I see a long-list of debugging hardware listed: 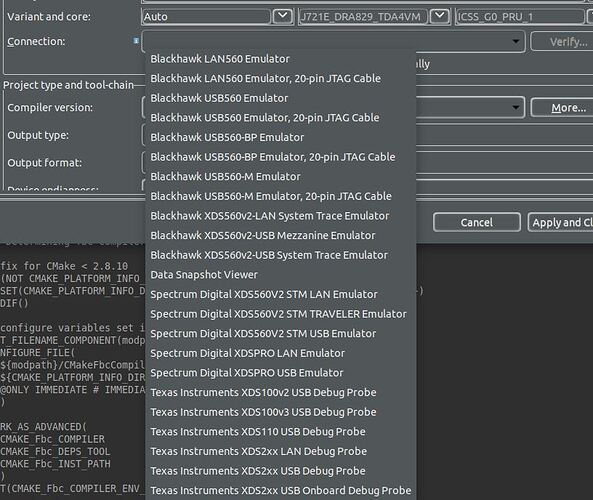 PRU_DebuggingHardwareOptions816×688 89 KB
Note this may just be for the PRU since that’s the core I have selected.

Just looking at the names, some can be eliminated as options just because they are listed as 20-pin, but that TAG-Connect pad only has 10-pins. Others can be assumed to be either USB or LAN based. But that’s still quite a list. So…

Which of these are best/intended/expected to be used with the BBAI64 (when doing Cortex-R or PRU development)?

And other than connectivity differences such as LAN vs USB, what are the pros and cons as to why you’d choose one over the other?

And if you use one of these, where did you get it (and for how much)?

Note for code running in the Cortex A72s, I don’t expect to need this. I believe I can continue to do what I’m most familiar with which is debug code running in Linux using typical Linuxy solutions. However when debugging code running on the Cortex R5s or PRUs, these options, I’m guessing, are going to require a traditional JTAG connection.

And IF there’s a hardware debugger included on the BBAI64, what are its capabilities and limitations that compelled the BBAI64 developers to include a JTAG port?

As you can see with all the questions, I’m hoping this thread can be an open ended “what do you use, why, and how happy are you with it” kind of discussion, and less of a “here’s your answer”

Also note, for my immediate purposes, I’m mainly only focused on the A72s and PRUs, with the possibility of messing with the Cortex Rs, if anything to get the MCU R5s to kick-off the PRUs before the A72s have completely booted (I’m hoping that’s possible, still haven’t gotten a clear answer as to whether it is or not).

However I’d love to hear from people that are also using a debugger to develop on the other various hardware offerings such as the C6x/7x DSPs, GPU, and Accelerators.

I did find in the PRU Cookbook the section that talks about debugging and the most interesting was the prudebug project that allows you to do typical debugging tasks (read register values, read memory, set breakpoints, single-step, etc). However the project was written for a PRU_ICSS subsystem where there is only PRU0 and PRU1. Has anybody expanded the project to support PRU_ICSSG subsystems that have an RTU0, RTU1, TX0, and TX1?

And this is probably very wishful hoping, but is there any chance this has CCS/Eclipse support so all the various functions this code exposes about the PRU can be displayed in a standard IDE form?

Hi @Chris_Grey
Have you had look the CCS - Code Composer Studio ?

The screenshot above is from CCS

Docs: Jtag is functional (openocd) (#31) · Issues · BeagleBoard.org / BeagleBone AI-64 · GitLab → Are you able to see this? you should have a config file for this. I am also trying to put some documentation together here: Welcome to an HowTO with OpenOCD on TI’s K3 SoCs | OpenOCD primer for TI’s K3 SoCs

The referenced HowTO link is a good starting point:

Welcome to an HowTO with OpenOCD on TI’s K3 SoCs

Primer on openOCD and how it works on TI’s K3 SoCs and general tips etc..

It would be nice to hear from a pro that has used CCS and the XDS560 on the BBAI64. Or even Lauterbach.

I would be very interested in learning more about where you go with this.

Excellent information there. And no I had not come across that. It covers multiple platforms, not just the BBAI64, so here’s the highlights that should give anybody else searching this a sense that it is possible, the equipment involved, where the equipment can be procured, and the cost.

~$40 TIAO JTAG Device
Once you get it, you’ll need to add a solder-blob to the pads to bridge-out a connection: 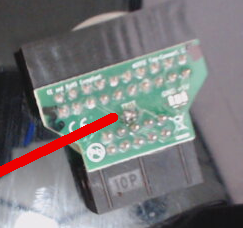 OpenOCD which mimics gdbserver so gdb can be used on the PC to perform the debugging.

You may also want to ditch your BBAI64’s heat sink for active cooling to get better access to the JTAG pad on the circuit board.

I did not see a link to where you can purchase one of those heatsink-n-fans as a kit.

Once you decide its worth investing in these tools, then go read the TLDR to figure out what to do with them.

What I did not get a sense of is how you tell CCS to use GDB to connect to OpenOCD. Although since its GDB, not a proprietary toolchain, this shouldn’t be difficult to figure out.

And I also didn’t get any sense as to whether this is only useful for debugging the Cortex A, or whether it works just as well for the Cortex R5s and PRUs. My guess is since JTAG is a daisychain, those processors are accessible as different Device IDs, but since the product names specifically call out ARM, I don’t know. More digging to figure that out would be necessary.

This post goes into my experience getting it to work with an R5 core:

Happy to report the heatsink doesn’t interfere at all with the Tag-Connect. However, I have run into an issue that I am having some trouble getting around. Same error occurs on both Win and Linux hosts Invalid ACK (4) in DAP response. D:\Users\Frede\Desktop\openocd-v0.12.0-rc1-i686-w64-mingw32\bin>.\openocd.exe…

From the last screen dump in that post, it looks like it only works with the A72 and R5 cores.

The whole Minimal Cortex-R5 example on BBAI-64 thread is worth a read. Lots of debugging info there.